Covid infections jump by half a million in UK, says ONS

Covid infections are rising again across the UK.

the latest figures from the Office for National Statistics (ONS) show.

sub-variants of Omicron - called BA.4 and BA.5 were the cause of the rise.

People can be infected even if they've had Covid before, though jabs are helping to protect against serious illness.

Here is the article about the current surge across Europe. Something that will happen every time a new variant develops.

officials are saying anyone over 75 who has not had a vaccine or booster in the past six months, to get one. While to use lateral flow tests as oftn as possible.

In the week ending 24 June, the ONS estimates Covid rates were:

Sarah Crofts, director of ONS, said: “Across the UK we've seen a continued increase of over half a million infections, likely caused by the growth of BA.4 and BA.5 variants.”

While Jubilee celebrations would have likely caused a big rise.

infections were going up in all regions and in all age groups.

In Scotland, which has had the highest Covid rates in the UK since the end of May, the rise in infections may be slowing slightly. 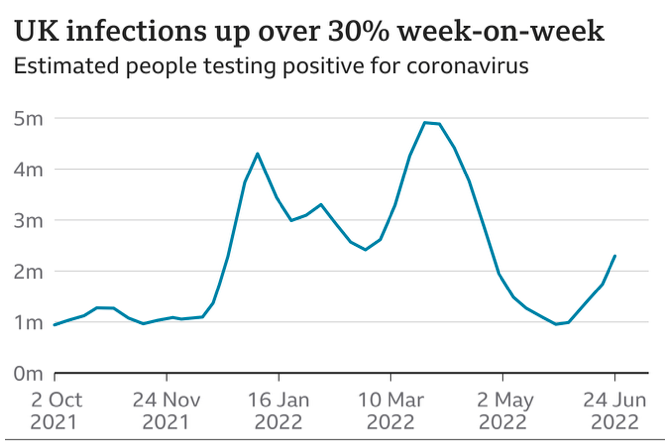 Here is Video I made about the rapid rise of summer of 2022 with covid 19 and why we need to promote at home informal testing with lateral flow tests.